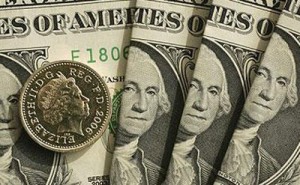 UK Pound Rises Above Two Dollars…MANCHESTER, UNITED KINGDOM – APRIL 17: In this photo illustration a British pound coin can be seen next to American Dollar notes on April 17, 2007 in
Manchester, England. The British pound has hit the two Dollar mark today in trading for the first time since September 1992 as well as trading at a 27-month low against the euro. (Photo Illustration by Christopher Furlong/Getty Images)